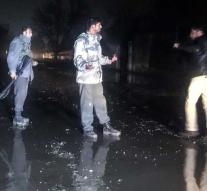 kabul - Due to a suicide attack on a G4S site, the largest security company in the world, at least ten people were killed in Kabul on Wednesday. That's what the Ministry of Health said in the Afghan capital. Nineteen wounded victims were taken to a hospital.

According to a spokesman, an unknown number of gunmen invaded the G4S complex after a car bomb was detonated nearby. A firefight with guards arose. According to Afghan media, the Taliban have claimed responsibility, possibly to indicate that they see nothing in peace negotiations that the government wants to put in motion.