Home / World / At least five cyclists on the highway 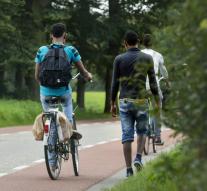 asten - At least five people have Saturday and Sunday cycled on highways in the country. Brabant Asten when a woman came in the crash . She was hit by two trucks when they bike crossed the highway and died at the scene . The police can not say who the woman is .

The fatal accident happened on the A67. On the same highway , some thirty kilometers away at Venlo, cycled three Syrian refugees. They were driving without lights on the emergency lane.

They were on their way to the application center in Ter Apel , over 200 kilometers from Venlo.

According to police, they used the navigation on their mobile phone and they followed the shortest route. The officers kept the Syrians and explained that you can not bike on motorways in the Netherlands.

The three have been transferred to the military police. According to police, was the woman who died at Asten no refugee. On the hard shoulder of the A15 at Herveld was also caught a cyclist . The man lives in Nijmegen. His bicycle he had stolen Saturday in Tiel. The man was arrested.