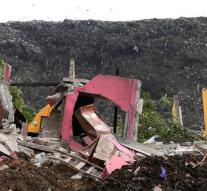 colombo - At least ten people have come to life because of the collapse of a landfill in Sri Lanka. Among the victims are four children, police said Saturday.

The dump mountain in Meethotamulla, a suburb of Colombo's capital, collapsed on Friday. According to local media, hundreds of homes or other buildings were buried. Army and police continued to look for possible other victims on Saturday. Residents declared that they had warned several times that the waste bin was about to collapse.