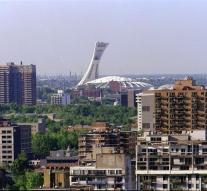 montreal - Montreal has opened the gates of the Olympic Stadium, built for the 1976 Summer Games, for asylum seekers. To this end, it was decided to meet the growing flow of refugees. More and more migrants, fearing in the US, are crossing the Canadian border.

The news transmitter CBC reported that Praida, the government organization responsible for reception, has reserved a hall for temporary housing. There will be one hundred to 450 beds. On Wednesday, the first bus of refugees, including children and pregnant women, arrived in the special accommodation. Mayor Denis Coderre welcomed the new guests via Twitter and promised them all the support of the city.

Although no official figures have been made known by the federal government, in the month of July, an estimated 1200 strangers reported in the province of Quebec hoped to get a residence permit. In July 2016, Praida helped only 180.