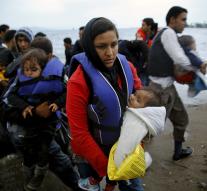 brussels - Asylum seekers should be thoroughly screened on arrival in the European Union. They must therefore up to eighteen months in centers being held. That says EU Minister Donald Tusk in an interview published Wednesday on the websites of six European newspapers.

" If you migrants and to monitor refugee, you have more time than that minute when the digital fingerprint is taken ", said former Polish Prime Minister on the websites of The Guardian, Le Figaro, La Stampa, El País, La Gazeta Wyborcza and Süddeutsche Zeitung.

" Today, access to Europe is easy ". Tusk called the smooth reception policy of German Chancellor Angela Merkel and designates as " dangerous ". " This is no longer a matter of European solidarity, it is a capacity problem. The Europeans would be would be less reticent if the EU external borders more efficiently controlled. "