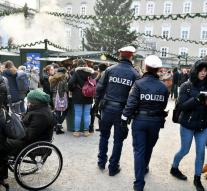 salzburg - Austrian police think the arrest of a 25-year-old Moroccan asylum seeker to have prevented an attack.

The man would have had plans to carry out an attack during the holidays in the city of Salzburg. He was arrested Monday in a refugee center in Fuschl am See.

In the center is no evidence of plans found, but authorities suspect to be the husband of a member of a terrorist organization. However, the police took small amounts of drugs, 8,000 euros in cash and several 'electronic devices' to complete.

Austria has since the attack taken in Berlin measures to better protect Christmas markets and other public places.

The Christmas market in Salzburg is a popular tourist destination during the holidays.