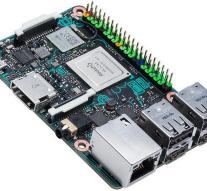 taipei - Asus also comes with a mini-computer, a competitor of the Raspberry Pi. The Tinker Board is 8.6 centimeters long and 5.3 centimeters wide. He has 2 gigabytes of RAM, twice as much as the Pi, and has a 1-gigabit speed, ten times as fast as the Pi. However, it is also about twice as expensive as the Pi.

Tinker Board has built-in WiFi, bluetouth, four USB ports, an HDMI port, a jack for headphones and a hole for a MicroSD card. He is considerably more expensive than the Raspberry Pi. Tinker Board will cost 60 to 70 dollars, converted from 55 to 65 euros.