Home / World / Astronauts from ISS safely back on earth 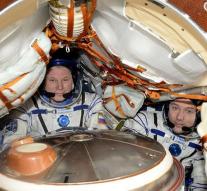 bajkonoer - Two astronauts returned to Earth on Thursday after staying in ISS International Space Station. It is about Frenchman Thomas Pesquet and the Russian Oleg Nowizki.

On images of the NASA spacecraft organization NASA was able to see how the capsule with the two astronauts landed hanging on a steppe in Kazakhstan. Shortly afterwards, the message was that the two men went well.