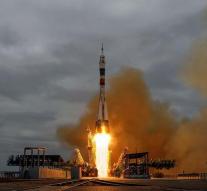 moscow - A Russian spacecraft on Friday three astronauts delivered to the International Space Station laboratory. The Soyuz was Wednesday from the Baikonur Cosmodrome in Kazakhstan left with the Russians Roezikov Sergei and Andrei Borisenko, and American Shane Kimbrough aboard.

The trio would leave already on September 23, but technical problems prevented them. In the ISS they carry fifty experiments. They remain in the space 155 days. The space laboratory hovering about 400 kilometers above the Earth.