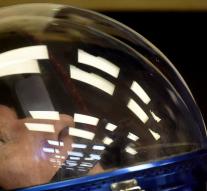 london - A woman in Britain on Christmas Eve was a remarkable phone call. The caller said: 'Hello, I speak with planet earth?' It turned out the British astronaut Tim Peake, flying from the ISS made a call, but in doing so the wrong number was entered.

Via Twitter Peake offers verontschudigingen to the woman he got on the phone. It was no joke, but just the wrong number

Peake had previously not lucky with a space bell. Earlier this week called the astronaut to his parents, but they were not home. He therefore spoke only their voicemail.