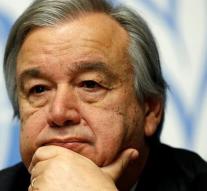 - Antonio Guterres on Thursday by the General Assembly officially appointed as the new Secretary General of the UN. The Portuguese follows on January 1, the South Korean Ban Ki-moon, who has two periods of sitting.

The UN Security Council voted earlier in the appointment. Guterres was from 2005 to 2015 by the UN High Commissioner for Refugees. From 1995 to 2002 he was Prime Minister of Portugal.