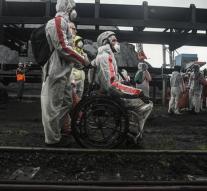 amsterdam - During the demonstration at OBA transshipment company in the port of Amsterdam, seven protesters were arrested for open violence on Saturday. They were arrested because they threatened security, the police said. The demonstrators climbed into towers and devices.

Between the two hundred and three hundred activists, the company blocked Saturday morning. At CMA coal is skipped.

The company did not want to respond, the workers would be sent home. Because demonstrators also sat on the track on the grounds and climbed into cranes, the coal forecast has been shut down, report themselves.

'We'll see it a bit,' said a police spokeswoman. 'It is a announced action. We will not get into it right away. 'The police are in talks with demonstrators and management leaders on the termination of the demonstration with which protest code Red protests against the use of fossil fuels.

Code Red has set up a climate camp in the port area this week, which has to take place until monday. The action is a citizens initiative, prompted by the verdict in the Urgenda case, exactly two years ago, in which the judge ruled that the government should do more to protect its citizens from climate change.

'Code Red wants the Amsterdam port to shut its doors for oil, gasoline and coal, and that the Netherlands is leading the transition to a fair and sustainable society,' the statement says.