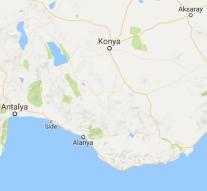 istanbul - Turkish police officers shot a man in the city of Mersin who was about to commit suicide bombing. According to sources of Turkish media, he suspected himself near a police station and the regional headquarters of intelligence service MIT.

The police officers opened the fire when the thirties ignored an order to stop. This happened about 30 meters from the police station in the coastal city. Tree experts smashed after the shooting because the man seemed to wear an explosive on his body.

A prosecutor said the authorities still assume that the dead man was a follower of Islamic state. Followers of the terrorist group have committed multiple attacks in Turkey.