Home / Tech / Assassin's Creed is coming to the smartphone 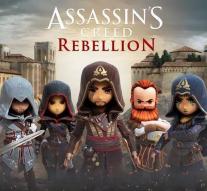 Players get the chance to form their own Assassin Brotherhood, manage a fortress and complete secret missions against the Templars. You can recruit up to forty Assassins, including famous characters like Ezio, Claudio and Machiavelli. In addition, there are 20 more free Assassins to be developed especially for the new mobile game.

Assassin's Creed Rebellion takes place in Spain at the peak of the Inquisition. Players build their own headquarters with rooms in which they focus on training their Assassins or creating new objects and equipment. The higher the level of Brotherhood, the more rooms and content are available, allowing new upgrades to be released.

As a headquarters, this fort plays a major role in the missions where Assassins meet before they are broadcast in teams of three. Not every Assassin fits every assignment; Some skills and character combinations are better suited to certain missions than others, which makes the development of the Brotherhood a major impact on the gameplay.