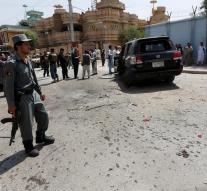 kabul - A suicide attack on the leader of an Afghan group that fights against terrorists Islamic State failed Saturday. Well arrived at least two bystanders, including a boy, were killed by the explosion. Seventeen people were injured.

A spokesman for the governor of Nangarhar province, the attacker had targeted commander Haji Hayat Khan, who was heading by car to Jalalabad. His bodyguards saw approaching a suspicious man on a motorbike. When that did not respond to a stop sign they opened fire. The attacker managed to bring still in his bomb belt exploded. Khan and his guards were unharmed.

Responsibility for the attack has not been claimed. In Nangarhar are except IS cells also militant insurgents from the Taliban and the Haqqani network operates.