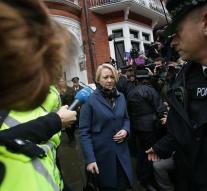 london - Wikileaks frontman Julian Assange on Monday interrogated in the Ecuadorian embassy in London. Assange is under investigation in Sweden into the sexual abuse of two women. He would have harassed women six years ago.

The interrogation was conducted by an Ecuadorian prosecutor. The Swedish Chief Prosecutor Ingrid Isgren, was present and questioned by the officer to Assange. Isgren was about four o'clock in the embassy. She left the building without answering questions.

Assange sought four years ago refuge in the Ecuadorian embassy. He feared extradition to Sweden because he was afraid he would be extradited back from Sweden to the United States. Willing to prosecute Assange because he made public a large number of secret US diplomatic messages by WikiLeaks.

Sweden Assange is trying to answer for years, but so far did not. Isgren now received permission from Ecuador to make Assange questions. The findings Isgren in determining hand the Swedish prosecutor's or the investigation is continuing. The Swedish lawyer for Assange, Per Samuelson, said he could not be present during the interrogation. ' Ecuador refuses to let me in and insists that the interrogation without my presence is continued, against the wishes of my client, '' says Samuelson.