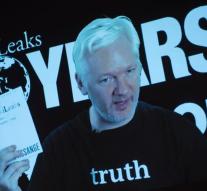 stockholm - The hearing of Wikileaks founder Julian Assange in the Ecuadorian embassy in London is a small month postponed until November 14th, so his lawyer can be present. Which has informed the Swedish Prosecution Thursday.

The Australian Monday, October 17th would be questioned in the embassy about reports of sexual offenses made against him in Sweden. He stays for more than four years in the embassy, ​​where he sought refuge to escape extradition. He fears Sweden would extradite him to the United States, who want to prosecute him for divulging state secrets.

After months of negotiations, Sweden and Ecuador were agreed that Assange would be questioned in the embassy. The Swedish prosecutor sent asking for it by that would allow an Ecuadorian prosecutor to him.