Home / World / Assange can not Internet 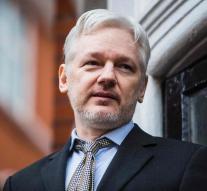 - Ecuador has limited access to the internet for Julian Assange. Which has admitted the government of Ecuador on Tuesday. Assange, founder of Wikileaks, resident since 2012 in the embassy of the South American country in London.

WikiLeaks had already reported Sunday that Assange had no more connection, which was hinted that Ecuador may had come under pressure from the United States to this decision. Wikileaks had published hacked emails in recent weeks going over the Democratic presidential candidate Hillary Clinton.

The government of Ecuador announced that the leaking of information is the responsibility of WikiLeaks and that it will not interfere with the electoral process. ' Ecuador will not yield to pressure from other countries. On his own authority Ecuador has temporary access to the communications of its British Embassy limited, '' reads the statement.