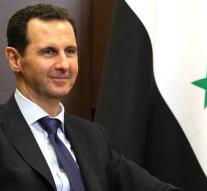 seoul - Syrian President Bashar al-Assad says he plans to visit North Korean leader Kim Jong-un. That is what North Korean state media report. It may be the first meeting between Kim and another head of state in Pyongyang.

'I'm going to visit the Democratic People's Republic of Korea (North Korea) and meet Kim Jong-un', Assad said on 30 May, the North Korean state press agency KCNA writes. The office of the Syrian president has not reported anything about this yet. Reportedly, Assad made the remarks when he received the credentials of the North Korean ambassador Mun Jong-nam.

Pyongyang and Damascus maintain good relations. Observers from the United Nations accuse North Korea of ​​cooperating with Syria in the field of chemical weapons. North Korea denies this.