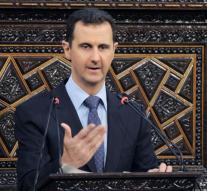 moscow - Syrian President Bashar al-Assad may imagine Donald Trump as US president 'a natural ally' is at least serious in the fight against terrorism as Trump about that fight. Assad said this Wednesday in a televised interview with Russian media.

Assad said he was encouraged by statements of Trump on combating violent Islamists and not meddle in the affairs of other countries. Assad, however, did not know whether these statements will also be reflected in trumps policy.