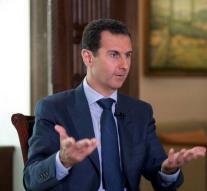 damascus - Syrian President Bashar al-Assad called the reconquest of Aleppo 'historic.' In a video message on YouTube, he said that the world looks different after the 'liberation of Aleppo.'

'Today history is written,' said the leader of the regime, which has strengthened its position with victory in Aleppo. He now makes up the service in major cities in the west of the country. According to Assad, the events in Aleppo part of a story 'that started six years ago when the crisis began and the war against Syria. '

The Syrian president came with his movie on the day of the evacuation of thousands of rebels and civilians by bus from Aleppo. With their departure, the opposition against Assad seems to be in the city permanently broken. On part of the country and in the east of the country is not the case. Especially IS occupied a considerable part of Syria.