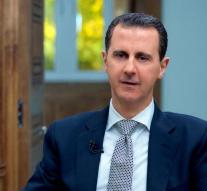 warendorf - A relative of Syrian President Bashar al-Assad is trying to get asylum in Germany. It is about Fatima Massoud al-Assad living in or at the place Warendorf near Münster (North Rhine-Westphalia).

According to the Westfälische Nachrichten, she is the widow of Assad's cousin. She called for asylum last year, but it was rejected. She appealed against it.

It is disturbing the local authorities that the woman was sent to Warendorf by the German asylum organization while knowing who it was. They call it unacceptable that nothing has been said about the 'special background' of the woman.

The woman in Syria would have become the victim of internal quarrels in the family. She even became seriously injured when a relative shot her.