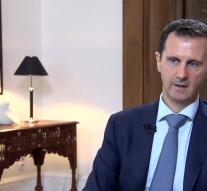 - Syrian President Bashar al-Assad, according to Russian media willing to write out early presidential elections. The condition is that the Syrian people support the idea of ​​early elections and that the country first " must be liberated from terrorism ".

That Alexander Yushchenko of the Communist Party of the Russian Federation (KPRF) Sunday told news agency TASS. Yushchenko expressed Assad in Damascus. The elections were discussed during a visit by Russian parliamentarians.

Next presidential election would Assad also agreed to parliamentary elections and a constitutional reform.