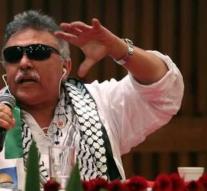 bogota - The United States has asked the government of Colombia to hand over one of the former leaders of the FARC guerilla movement. The American embassy has submitted an official extradition request for Seusis Hernandez, who is also called Jesus Santrich.

According to the US, the rebel leader who also participated in the peace negotiations with the government, would be involved in drug smuggling to the United States. Santrich was arrested by the Colombian police in April and has since been detained. The Colombian President Juan Manuel Santos would have hinted that he agrees with the extradition.

FARC politician Ivan Marquez previously warned that extradition would be a violation of the agreement with the guerrillas. 'Because of the arrest of our comrade Santrich, the peace process is at the most critical point and threatens to lead to a real failure. ''