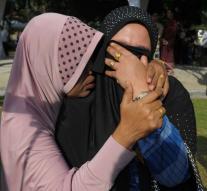 - In Southeast Asia Saturday commemorated the 2004 tsunami. The tsunami that followed a massive earthquake in the Indian Ocean cost in that year to about 230 000 lives.

Most people died in Indonesia, where the memorial according to media is used primarily to ensure that such a disaster does not have to take place once. With the commemorations and processions the inhabitants of the affected areas are hoping to keep up the momentum in improving safety measures. In Sri Lanka, where some 40 000 people were killed by the tsunami, the disaster is commemorated with two minutes of silence.

In Chennai, the Indian repairs are still ongoing. Many fishermen do not want to draw in new shelters, because they too are far from the sea, writes the Deccan Herald. When the tsunami reached the coast of India, it was the very fishermen who were severely injured.