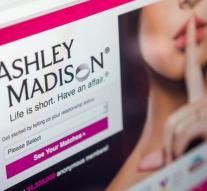 - Strange People Site Ashley Madison has reached a settlement with the US authorities. The company was hacked last year, after which came to be personal information of about 37 million users in the street. These included for photos, user names, email addresses and passwords.

The owner of Ashley Madison has been fined $ 17.5 million (16 million euros) due to the lack of security. The bulk of this amount is conditional. The company has to worry about at the moment but $ 1.6 million. That money is distributed among thirteen states, the District of Washington and the federal government. The ultimate penalty is so low because of the company behind Ashley Madison ' is unable to pay '' of the full amount.

Ashley Madison offered its customers the opportunity to erase every trace of the account from the system. That 'full delete' cost $ 19. Many users whose information was put on the street, already had more than a year paid for such a full delete. Their data were not even allowed to stand in the systems.

Ashley Madison also received a slap on the wrist for cheating. The owners had created fictitious profiles of women. They wanted to lure men to spend more money. For the fake accounts they used some photos of real users. Ashley Madison has now promised to quit.