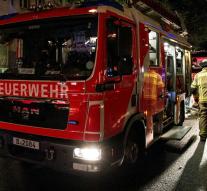 woldegk - In the East German town of Woldegk Monday night fire broke out in an apartment where refugees were accommodated. The police assume that the fire ignited.

An unknown in the basement flammable material ignited, and the smoke went up through the stairwell. The residents, German families and refugees, could not therefore escape from the building. The fire department has rescued 35 residents of the building with ladder trucks from the building.

A 76-year-old woman and a girl of 14 were taken to the hospital because they had inhaled smoke. The home is temporarily uninhabitable, reported the police. There is emergency shelter regularly. The police have opened an investigation.

In East Germany are often homes torched in which refugees are received. Usually, the perpetrators from the extreme right-wing circles.