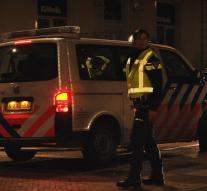 zwolle - In Zwolle was equally restless Friday because members of a motorcycle club wanted downtown. The mayor issued a noodbevel, even though because of previous incidents. Six men were arrested because they could not show their ID. The noodbevel allowed to frisk everyone.

The members of the Outlaw Motorcycle Gang Trailer Trash Travellers wanted by the police 'in full color, so in full regalia, in the center. Because of two previous incidents to the police was alert and also present in the inner city. Then mayor Henk Jan Meijer came with a noodbevel. He pointed to the center as a security area where the police may search preventively.

Agents held about seventy against. Six were arrested. The rest left the center under supervision.