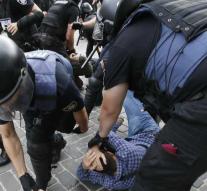 kiev - The Ukrainian police arrested 56 members of nationalist groups in the capital Kiev on Sunday after fights. The fighting broke out a few hours before the annual Gay Pride starts, reports the police.

In the early morning more than 150 extreme right-wing demonstrators tried to block the route of the march through the center of Kiev. Small skirmishes broke out when the police cleared the streets.

The far-right group C14 said the police surrounded the protesters and attacked with sticks and tear gas. 'Look at how they protect 'sexual minorities' and violate the rights of ordinary Kiev citizens,' wrote the group on Facebook.

The Gay Pride of Kiev was disrupted in 2015 by violent attacks, but in 2016 and 2017 the march was largely peaceful thanks to the efforts of many police.

Last week, leading human rights organizations condemned the authorities for inactivity of the Ukrainian police in response to the increasing violence against ethnic minorities, women's rights activists and lesbians, homosexuals, bisexuals and transsexuals.