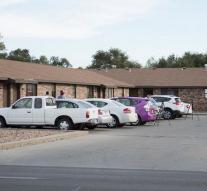 - Three men have been arrested in Kansas Friday for plotting an attack with a weapon of mass destruction in an apartment in Garden City, in the southwest of the US state. In the apartments live among other Somali immigrants who use the homes as a mosque.

The three suspects, ranging in age from 47 to 49 years, would be a member of the extreme-right militia Crusaders (Crusaders) and strongly opposed to the government, immigration and Muslims. They were monitored for eight months by the authorities.

During that period, men were more concerned with surveillance around the complex, collect weapons and explosives and writing a manifesto. That should have been published after the attack. The plan of the militiamen was to place at the four corners of the building with explosives laden vehicles. The attack was scheduled for the day after the US presidential election, early November.

An investigation into terrorist activities of various militias in southwestern Kansas led the FBI on the trail of the three. The investigation department made use of an informant who attended meetings of the militias.