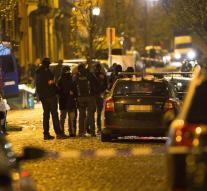 brussels - In Belgium, in the night of Monday to Tuesday two suspects arrested in connection with a terrorism investigation. The arrests are separate from 'Paris', reports the Flemish broadcaster VRT.

The arrests took place in raids in Brussels, Flemish Brabant and the region around Liège. A total of six people were arrested. Four have been released.

The two detained are suspected of being part of a terrorist group. What were their plans, is still unclear. The federal prosecutor's office confirmed the news of the arrests, but would lose nothing, said the VRT.

According to the Walloon Broadcaster RTBF would the defendants have planned attacks against police targets.

Het Nieuwsblad wrote Tuesday that the Interior Ministry has raised the threat level for police offices in Brussels from two to three. That is the second highest level. The reason for this decision are new, concrete evidence of an attack in and around the head commissioner of police at the Grand Place in Brussels.

According to the Belgian newspaper is now even stronger surveillance and opening hours for the police stations adjusted. In the rest of Belgium gold at police stations in recent months all three levels.