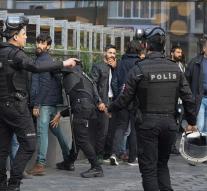 ankara - In an action against the banned Kurdish Workers Party PKK, Turkey has arrested fifteen people. The state news agency Anadolu reported Sunday that the arrests were carried out in the southeastern province of Adana.

The anti-terrorist police put the helicopters in action. The tensions between the Turkish authorities and Kurdish groups have risen sharply over the past week. The Turkish government maintains militant Kurds responsible for an attack Friday in the southeastern city of Diyarbakir. Therefore, eleven people were killed and over a hundred injured.

The attack followed the arrest of eleven Kurdish MPs, including the two chairmen of their People's Democratic Party (HDP). The government considers the HDP as an extension of the PKK.