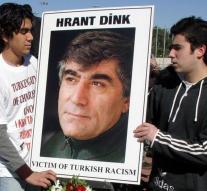 - Turkish police have arrested four people suspected of involvement in the murder of Turkish-Armenian journalist Hrant Dink in 2007. The Turkish newspaper Hurriyet reported Tuesday that it is police officers.

The four were members of the movement of the US-resident Muslim cleric Fethullah Gulen. Turkey says that he is the mastermind behind the coup of July 15, but Gülen denies the accusation.

Dink was eleven years ago, shot dead in Istanbul. He was controversial in nationalist Turks because he said the Turkish aggression against Armenians at the end of World War I genocide.


Ogün Samast, at the time a seventeen year old boy who had gone early from school, confessed to the murder. He was sentenced in 2011 to nearly 23 years in prison.