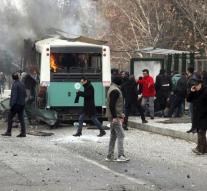 ankara - The Turkish authorities have arrested seven suspects following the bombing in the Turkish city of Kayseri. In five other potential stakeholders is still being sought, said Minister Suleyman Soylu (Interior) at a press conference.

By a blast at a bus arrived Saturday morning thirteen soldiers killed and according Soylu least 56 people injured. Moreover, many victims do not have life-threatening injuries, says Minister Recep Akdag Health.

Outside Turkey is shocked by the attack. 'My thoughts are with the victims and survivors of this horrific attack', said Minister Bert Koenders (Foreign Affairs) know.

The Russian President Vladimir Putin made himself heard. He let his Turkish counterpart Recep Tayyip Erdogan in a telegram to know to be ready to step up cooperation to curb terrorism.