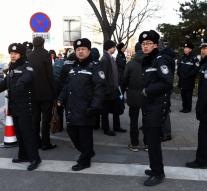 - Authorities in China have an unknown number of people were arrested for alleged involvement in an attack on a guard post in the Inner Mongolia region. That the BBC reported Monday according to Chinese media. About a hundred masked men had Sunday morning at the checkpoint people beaten and buildings damaged.

It is unclear what the reason for the attack. The station is located in an area where tensions between minority ethnic Mongols and a majority Hanchinezen.

The attack lasted about two hours and thirty people were injured. The post guards were reportedly beaten and robbed. Then they tied up and left outside. It was at that time such a-20 degrees celsius.

The masked men had batons and pepper spray with them. With two vorkheftrucken they drove to the buildings in the west of the region.