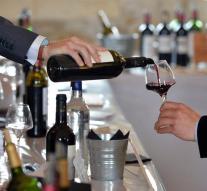 bordeaux - French police have arrested a gang that stole large quantities of wine in the Bordeaux region. French media reported Friday that five suspects stuck because of the theft. According to Justice thieves in March near Bordeaux for 400,000 euros quality wines, 'grand crus' stolen.

The loot was sold through an accomplice in Marseille in southeastern France. The police has been two months working on the case 'Bacchus gang 'was baptized. In total were arrested so far nine people. The gendarmerie has promised to return the recovered bottles to the owners.