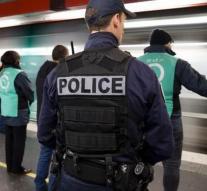 - The young man who died Tuesday night after his arrest in the French Beaumont-sur-Oise, did not come through violence killed. The prisoner Adama Traoré was ill by severe inflammation in multiple organs, judicial reported Thursday, after section was performed. Traoré's death led to riots in Beaumont and surrounding municipalities located north of Paris about 20 kilometers.

On the night of Wednesday to Thursday was for the second consecutive night clashes between about two hundred residents and 180 police officers. There are fifteen cars and dozens of bins set alight and petrol bombs were thrown at a school and a town hall. Nine rioters were arrested, but no one was injured, reported French media.


In 2005, many poor French suburbs by a wave of violence hit after two boys were electrocuted when they tried to hide on the run from police in an electricity substation.