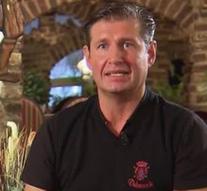 - The wounded, confused man who was arrested Sunday in a Croatian restaurant in the German Saarbrucken, appears to be the 43-year-old owner of the case.

Robert S. was found asleep in the basement by a special terror unit of the German police after repeatedly had tried to get in touch with him. S. had earlier Sunday with a bloodied T-shirt barged into the restaurant and said that everyone had to go outside.

It is not clear how the man was injured. According to the German newspaper Bild he had marital problems. The man appeared last year on German television in a program about his restaurant Dubrovnik.