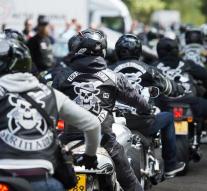 nets - The police Friday in Etten-Leur arrested a 28-year-old gunman. The man, who is a member of motorcycle No Surrender, was wanted for a violent offense. Officers saw him walking by chance.

Because the suspect is aware that he may be armed, several police units were summoned to arrest him.

Police closed the man in Frederick Eden Street in Etten-Leur. With drawn pistols demanded that officers giving him his hands up. The man appeared to have a gun in his waistband.