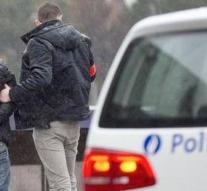 brussels - The 12 people arrested in Brussels for Tuesday in a terrorist investigation are free again. The police had taken them after fourteen searches in a survey of March's last year's attacks at the airport and a subway station in the Belgian capital.

The action turned around a garage box where the perpetrators would have left arms. Clues were found on a laptop of the terrorist cell. A year ago a massive search was sought for the warehouse, but now it was not found, reports Belgian media. Eight of the places visited are located in the district of Schaarbeek in Brussels.