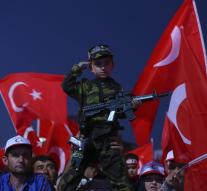 - An Istanbul court has issued an arrest warrant against the Turkish cleric Fethullah Gulen residing in the US. He's wanted for a,, giving the order for the coup on July 15 '', the state news agency Anadolu reported Thursday.

Turkish President Recep Tayyip Erdogan has accused Gulen since the failed coup of all that he was behind the attempt.,, There is no doubt that the coup attempt is an action of the terrorist movement and commissioned by the founder and accused Gülen has been performed, '' the court said.

It is the second arrest warrant against Gülen. He is wanted since last year due to the creation and management of an armed terrorist movement.