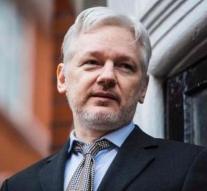 stockholm - The Swedish justice has revoked the international arrest warrant against Australian whistleblower Julian Assange. The investigation against the founder of whistleblower WikiLeaks following a possible rape has been suspended.

The European arrest warrant is also revoked. That says the Swedish newspaper Expressen.

Assange has been in the embassy of Ecuador in London since summer 2012, to avoid prosecution by Sweden where he is suspected of rape, and the United States. There he may be prosecuted for publishing confidential government documents.