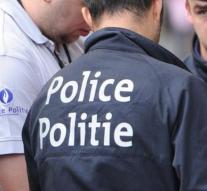 brussels - The Belgian police Wednesday in Sint-Jans-Molenbeek executed a search warrant in connection with the investigation into the attacks in Paris. It is a person taken in for questioning. In another terrorism trial, which is entirely separate from the attacks in Paris, has made a search, but that yielded no results. Reported Het Nieuwsblad and confirmed by the federal prosecutor.