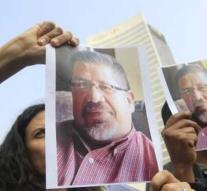 mexico city - The Mexican police arrested the suspected murderer of the well-known journalist Javier Valdez. This was announced by the Minister of the Interior via Twitter.

Valdez (50) was shot in 2017 in the state of Sinaloa, in the northwest of Mexico. In Sinaloa the violence erupted last year after the arrest and extradition to the US of drug boss Joaquin Guzman, nicknamed 'El Chapo. 'Valdez wrote a lot about the drug gangs in the state and how dangerous it is for journalists to do their job there. Shortly before his death, he published a book about it, Narcoreporting.

Valdez received another International Press Freedom Prize in 2011 for his coverage of drug smuggling and organized crime. On that occasion, he said in his speech: 'At the place where I work, Culiacán in the state of Sinaloa, it is dangerous to be alive. '

According to human rights organization Article 19, Mexico is one of the most dangerous countries in the world for journalists to work. This year, three journalists have already died in the country.