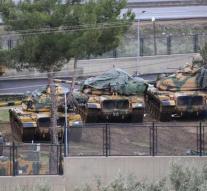 The Turkish army pointed to the Kurdish fighters in a statement with an accusing finger. They would have attacked Turkish positions. The Turkish action therefore remained 'within the limits of legitimate self-defense', citizen news agency Anadolu quoted from a message from the army command.

The Turkish Defense Minister, Nurettin Canikli, said on Friday that the operation against the Kurdish militias 'actually began' because all shelling is being carried out. The YPG said that many dozens of projectiles were fired at villages. Ankara sees that Syrian-Kurdish militia as an extension of the banned PKK movement.