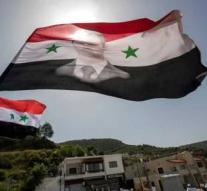 beirut - The Syrian armed forces have begun to shoot an encircled stronghold of Islamic State (IS) just south of the center of Damascus. It is assumed that this heralds the recapture of the enclave of fighters of IS and of the al-Nusra front linked to al-Qaeda.

The IS group is particularly entrenched in the town of al-Yarmouk and next to it there is a stronghold of the al-Nusrafront around the town of Babbila. This is less than 5 kilometers from the center of Damascus.

To the north-east of the city, several combat groups were active in a large area until recently. This large stronghold of mainly Sunni extremists in the East-Ghouta region has been completely in the hands of the government since last weekend. The last fighters have agreed to be evacuated under the supervision of Russia. They have gone to the far north of Syria.