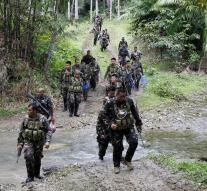 manila - The Philippine army has killed an important member of the Islamic terrorist group Abu Sayyaf. The headline would, among other things, be responsible for a series of bombings and abductions in the south of the country. That is what the army reports on Saturday.

Alhabsy Misaya was killed during a firefight with marines in the province of Sulu, a bolts of Abu Sayyaf. The group has ties with Islamic State and is notorious for its abduction and detoxification of prisoners, if no ransom is paid.

According to the army, Misaya has been involved in violent activities for more than fifteen years and is considered to be one of the most notorious kidnappers in southern Philippines.

Abu Sayyaf is a major issue for the authorities of the Asian country. The terrorist group continues to abduct mostly seamen from Indonesia, Malaysia and Vietnam. The group has also captured Westerners. Last year, two Canadians were beheaded and in February of this year an elderly German. Abu Sayyaf also holds the Dutchman Ewold Horn. He was abducted in 2012.