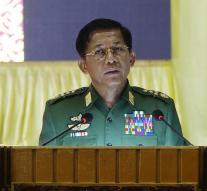 sittwe - The army of Myanmar has called on the fledgling population of the state of Rakhine to return home. It is time for 'national races' to rebuild the community. General Min Aung Hlaing did not mention the 422,000 Rohingya who fled the area.

During a speech in Sittwe, Min Aung Hliang said the soldiers had done their best to treat the situation in the country as well as the rebellious Muslims attacked on August 25. The United Nations used a completely different reading: the response of the Myanmar army was aimed at carrying out ethnic cleansing in the Buddhist country and expelling the Rohingya.

Myanmar denies that and says that the soldiers have only come into action against the terrorists among Muslims. The general did not mention the alleged purification in his speech. The country's political leader, Aung San Suu Kyi, said Tuesday that Myanmar is ready to welcome the fought Rohingya again. Most of these ethnic Muslims fled to neighboring Bangladesh.