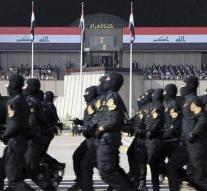 baghdad - Iraqi armed forces celebrated the liberation of Mosul, the last Islamic state militia in the country, Saturday with a military parade in Baghdad. Soldiers, tanks and other heavy vehicles pulled in the eyes of, among others, Prime Minister Haidar al-Abadi through the streets of the capital. In addition to army units, the police and shiite militias also contributed to the weapon scene.

Government leader al-Abadi announced on Monday that IS was defeated and Mosul was reinstated. He therefore called a party week. In the past few days, fighting has been reported in the west of the former million city.

The terrorist organization took Mosul in 2014 and from there large areas in Iraq. The offensive to expel IS began last October. The jihadists now rule in Iraq just a few places at the Syrian border.