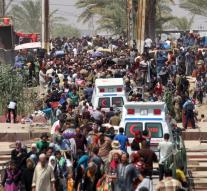 baghdad - The Iraqi army has launched an offensive to expel Islamic State of Ramadi, 100 kilometers west of the capital Baghdad. Troops pull the city from three sides inside, supported by the air force, the army reported Friday.

The last few months had been blocked supply routes, making goods in the city have become scarce. Ramadi since May IS owned. The city has 450 000 inhabitants.

In northern Iraq, IS also suffer a setback. Kurdish peshmerga fighters say they are the city Sinjar on IS regained.